Top Waterfalls of the Midwest

This area is botanically rich, supporting 541 native vascular plant species and 152 bryophyte (liverworts and mosses) species. A number of these species are considered glacial relicts. Glacial relicts are species that were more common in Missouri 12,000 years ago during the last Ice Age. Since then, the climate has warmed, forcing some species to inhabit micro-climates that mimic the cool, moist conditions of glacial times. Glacial relicts at Hickory Canyons include hay-scented fern, fir clubmoss and winterberry. The area is rich in fern species with over a dozen species represented.

The Lamotte sandstone here was formed from the sandy beaches of a shallow ocean that existed 500 million years ago. Layers of limestone were deposited over the sandstone, but millions of years of erosion and uplift of the Ozark Plateau exposed the sandstone we see today. After a rain event a wet-weather waterfall can be enjoyed from the end of the hiking trail on the east side of the county road. In the spring the headwater creeks here are a good place to spot a Louisiana waterthrush. 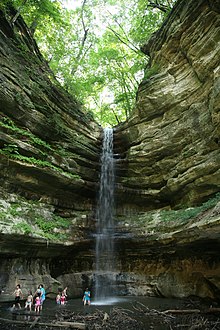 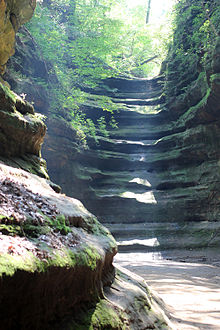 From December through February bald eagles can be viewed at the park, either fishing below the Starved Rock Dam, where turbulent waters stay unfrozen during the cold winter months or roosting on the Leopold or Plum Island. The Starved Rock State Park Visitor Center loans out binoculars to aspiring birders in exchange for the birder’s drivers license. During the winter, sports such as ice skating, tobogganing, cross-country skiing and sledding are allowed in parts of the park. Snowmobiling is not allowed at Starved Rock State Park.  Waterfalls become constantly changing ice falls during the winter as well.  14 of 18 waterfalls transform into scenic ice falls, with those at LaSalle, French, St. Louis, Tonty, Wildcat, Hennepin, Ottawa and Kaskaskia Canyons being especially scenic.   Ice climbing is another winter activity allowed in select canyons.

The area is very popular with tourists and collectively is known as the Hocking Hills Region. It features many private inns, campgrounds, cabins, restaurants, and other related businesses, including a recently developed zipline. 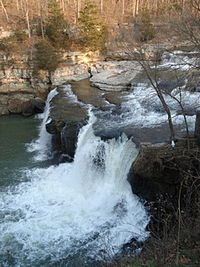 Cataract Falls is a waterfall located in northern Owen County in the west central part of the U.S. state of Indiana. The largest waterfall by volume in the state, it is part of the Lieber State Recreation Area.

Cataract Falls consists of two sets of waterfalls on Mill Creek separated by about 1 mile (1.6 km). Both falls consist of a series of drops. The total height of the Upper Falls is approximately 45 feet (14 m), while that of the Lower Falls is about 30 feet (9.1 m).

Immediately downstream of the Lower Falls, Mill Creek enters the southern end of Cagles Mill Lake, near the towns of Cunot and Cataract. The falls are just off State Road 42 and close to State Road 243.