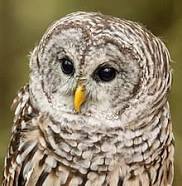 This list of birds of Minnesota includes species documented in the U.S. state of Minnesota and accepted by the Minnesota Ornithologists’ Union Records Committee (MOURC). As of the end of 2018, there are 444 species included in the official list.   Of them, 87 are classed as accidental, 39 are classed as casual, eight have been introduced to North America, two are extinct, and one has been extirpated.

The barred owl, also known as northern barred owl or hoot owl, is a true owl native to eastern North America. Adults are large, and are brown to grey with barring on the chest. Barred owls have expanded their range to the west coast of North America, where they are considered invasive.

The common loon or great northern diver is a large member of the loon, or diver, family of birds. Breeding adults have a plumage that includes a broad black head and neck with a greenish, purplish, or bluish sheen, blackish or blackish-grey upperparts, and pure white underparts except some black on the undertail coverts and vent. Non-breeding adults are brownish with a dark neck and head marked with dark grey-brown. Their upperparts are dark brownish-grey with an unclear pattern of squares on the shoulders, and the underparts, lower face, chin, and throat are whitish. The sexes look alike, though males are significantly heavier than females.