Michigan is a state in the Great Lakes and Midwestern regions of the United States. Its name originates from the Ojibwe word mishigamaa, meaning “large water” or “large lake”.  With a population of just under 10 million, Michigan is the tenth most populous of the 50 United States, with the 11th most extensive total area, and is the largest state by total area east of the Mississippi River. Its capital is Lansing, and its largest city is Detroit. Metro Detroit is among the nation’s most populous and largest metropolitan economies. 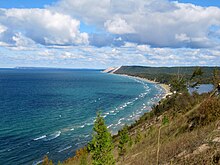 Michigan is the only state to consist of two peninsulas. The Lower Peninsula is often noted as being shaped like a mitten. The Upper Peninsula (often called “the U.P.”) is separated from the Lower Peninsula by the Straits of Mackinac, a five-mile (8 km) channel that joins Lake Huron to Lake Michigan. The Mackinac Bridge connects the peninsulas. The state has the longest freshwater coastline of any political subdivision in the world, being bounded by four of the five Great Lakes, plus Lake Saint Clair. Michigan also has 64,980 inland lakes and ponds.