My goal for 2020 is to adventure more. Whether it is hiking, camping or just exploring, I want to do more of it in 2020. We recently took a drive to Robertsville State Park to check it out. This park is located along the Meramec River. It is a smaller park, but still beautiful in […]

Imagine a marathon trail (at just over 26 miles, we mean that literally) connecting across the Chicago Southland from Indiana and the Chicago Lakefront to Lemont, Illinois and the I&M Canal Trail.

Imagine a channel that’s seen its share of booms and busts becoming a destination for recreation, a nature corridor, and a driver of good health and high quality of life.

Imagine discovering it was real. Welcome to the Cal-Sag Trail. 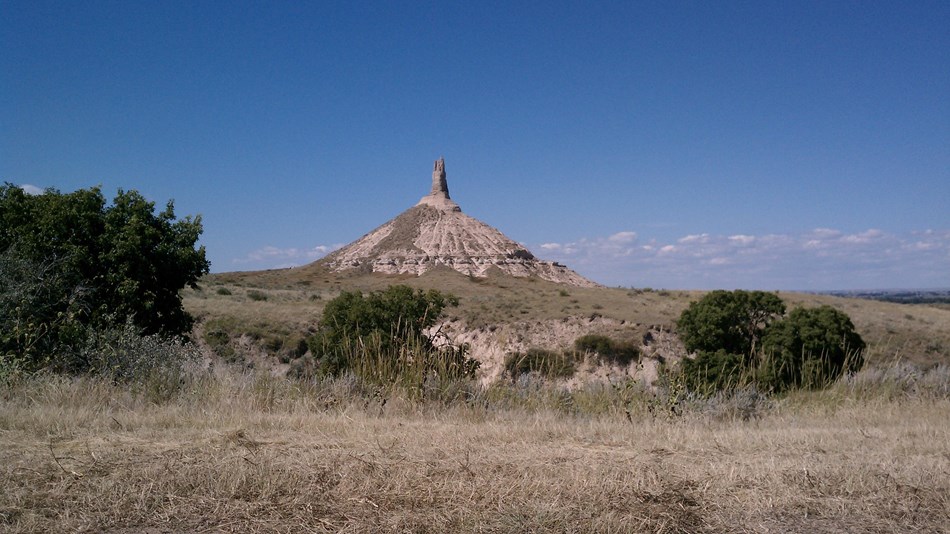 Explore the Mormon Pioneer National Historic Trail across five states to see the 1,300-mile route traveled by Mormons who fled Nauvoo, Illinois, to the Great Salt Lake Valley in 1846-1847 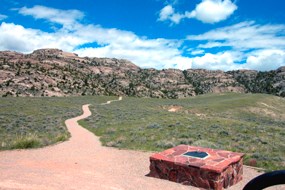 The story of the Mormon Trail is rooted in the beginnings of a unique American religion. In 1827, 21-year-old Joseph Smith announced that he had unearthed a set of golden plates, inscribed with the tenants of God’s true church. Smith said that he had been directed to the plates by an angel named Moroni, who also had given him divine tools for translating the ancient inscriptions into English. Smith used these to produce new Scripture called the Book of Mormon. In 1830, in western New York, he organized a legal entity that would become The Church of Jesus Christ of Latter-day Saints. His followers, who regarded Smith as a prophet, became known as Mormons.

Important differences between mainstream Christianity and Mormon doctrine quickly emerged, but it was primarily hostilities over land, business, and politics that caused Smith repeatedly to move church headquarters. Driven out of Missouri in 1838, the Mormons finally settled along a bend of the Mississippi River in Illinois. There they established a community they called Nauvoo, a Hebrew word meaning “beautiful place.” It was at Nauvoo that Smith cautiously began introducing the Old Testament practice of “plural marriage,” or polygamy, among select church leaders.

Thousands of converts flocked to Nauvoo, soon making it the largest town in Illinois. Neighbors initially welcomed the orderly, industrious settlers despite their religious differences. But relations gradually soured, with complaints centering on Mormons’ clannish business practices, accusations of theft, their electoral sway, and Smith’s political aspirations. Meanwhile, dissent emerged within the church as rumors leaked of secret plural marriages. After an opposition newspaper publicly accused the prophet and other leaders of polygamy, Nauvoo’s city council and Smith declared the paper a public nuisance and Smith ordered destruction of its press. For that he and others were arrested and jailed at Carthage, Illinois. On June 27, 1844, a mob broke into the jail and murdered Joseph Smith and his brother Hyrum. Other vigilantes attacked Mormon farms around Nauvoo in an attempt to expel them.

Brigham Young stepped up as Smith’s successor and began planning an orderly, spring 1846 evacuation of some 15,000 faithful to the Great Basin, Mexican-held territory beyond the Rocky Mountains. However, as anti-Mormon violence heated, Young decided to organize a vanguard of church leaders to depart in late winter, hoping that would pacify the vigilantes until the main body of Mormons could start west in April. On February 4, 1846, the first wagons ferried across the Mississippi to Iowa. This group halted after five miles and set up camp at Sugar Creek for a lengthy wait as Young and his associates concluded business at Nauvoo. Meanwhile others, anxious not to be left behind, drifted over to join the Sugar Creek camp. Young’s vanguard company unexpectedly swelled from his intended 1,800 emigrants to around 3,000—many without their own wagons and provisions.

On March 1, 1846, some 500 Mormon wagons lurched northwesterly across the winter-

There are many miles of diverse hiking and backpacking trails in the Shawnee National Forest including the 160-mile River to River Trail.

One of the most photographed locations in the state, Garden of the Gods’ scenic beauty is extraordinary. In the recreation area you can hike, camp, nature watch or picnic.

The Observation Trail features unique sandstone rock formations and panoramic views of the surrounding Garden of the God Wilderness. Interpretive signs explain the geological history. The 1/4-mile trail is made of natural sandstone and takes about an hour to walk. It contains short, steep grades and steps; benches are located along the trail and as a whole the trail is not tiring. Caution should be used due to the high cliffs in the area.

3 Of The Best Hiking Locations Around The Globe

3 Of The Best Hiking Locations Around The Globe

The webmaster of seMissourian.com and its sister newspapers. 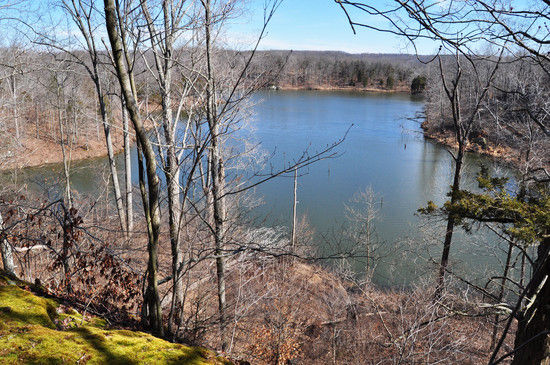 The lake was constructed in 1974 when Cedar Creek was dammed to provide a drinking water source for Carbondale, Illinois. Unlike most lakes in the U.S., Cedar Lake drains from south to north. This geographic oddity is a byproduct of glacial activity during the Ice Age.

Cedar Lake is best known for fishing, but the lake also features a network of hiking trails within the Shawnee National Forest. The Cove Hollow Trail, meandering along a series of sandstone bluffs on the western shore, provides panoramic views of the lake plus a wide variety of crazy rock formations. 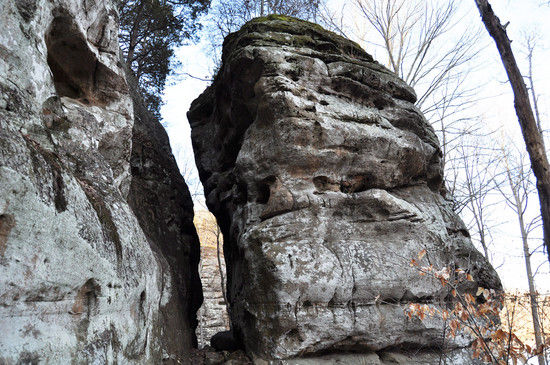 From the parking lot, one branch of the trail descends through a crack in the bluff face. 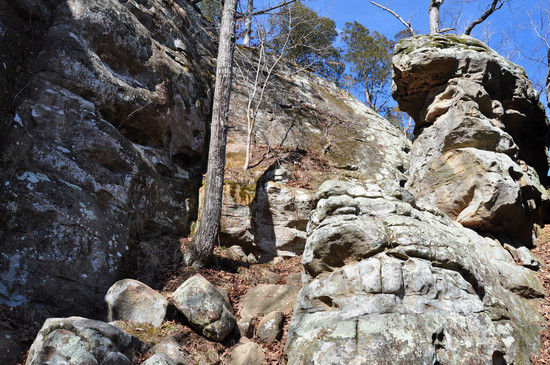 Another trail branch, not nearly as rugged, follows switchbacks to reach the bottom of the bluff, passing a small rock shelter. 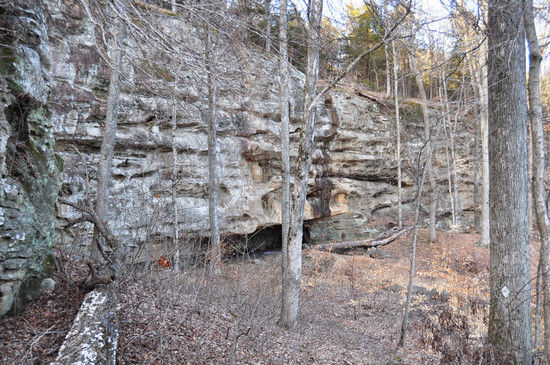 Both branches rejoin at the water’s edge in front of a large rock shelter. 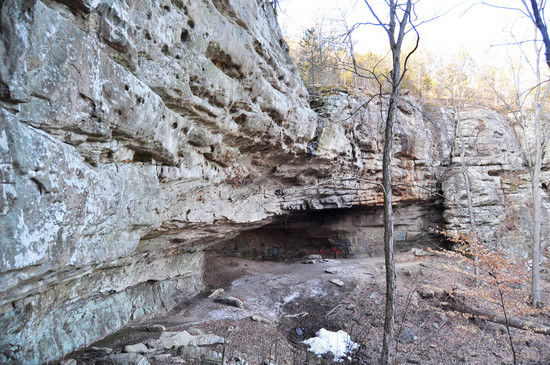 To the south, the trail continues past Cove Hollow, a narrow canyon bounded by bluffs on both sides. Much of the hollow is privately owned, however, so the trail veers left, crosses a small creek and proceeds along the lakeshore. 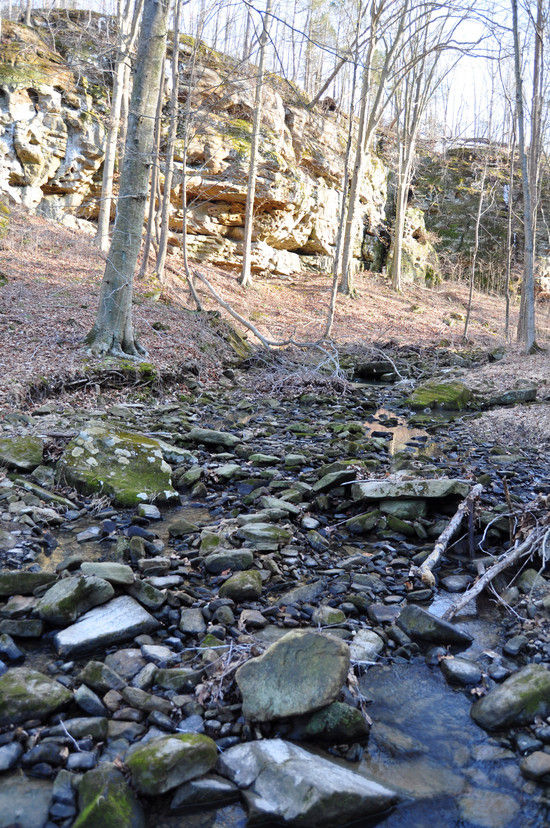 Straddling a narrow path between the water’s edge and the bluffs, the trail passes another rock shelter featuring a steady drip of water from above. When I visited on the last day in February, the ground was still below freezing, creating a mound of ice as the dripping water re-froze on contact. I quickly determined that this “micro-glacier” was, indeed, slicker than snot. 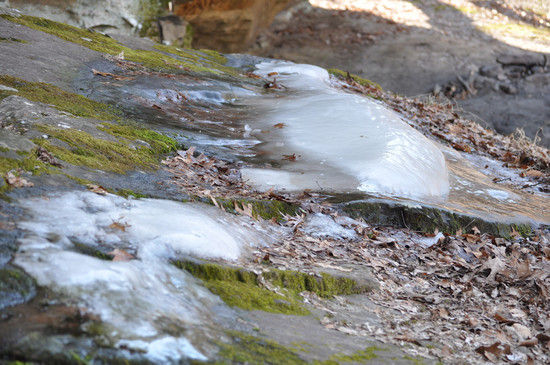 A side passage along the bluff opens into a room with walls covered in moss. 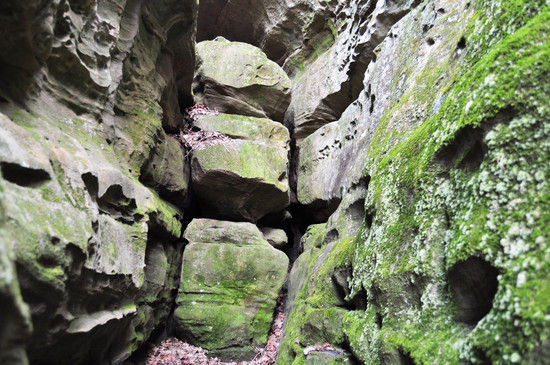 The moss grows in a wide variety of textures and colors. 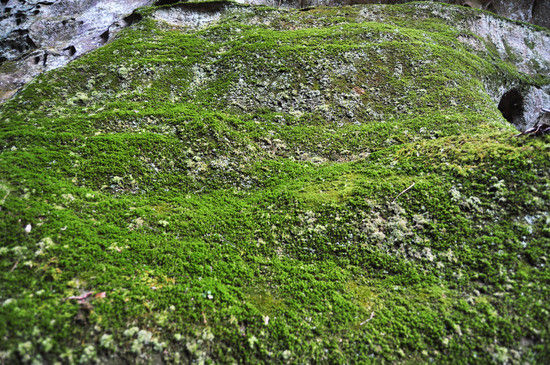 Continuing along the bluff line, the trail enters an area with many downed trees. It’s hard to say whether this was caused by Ice Storm Number 1, Ice Storm Number 2, the May 2009 “Inland Hurricane”, or some combination of storms, but the damage is extensive. 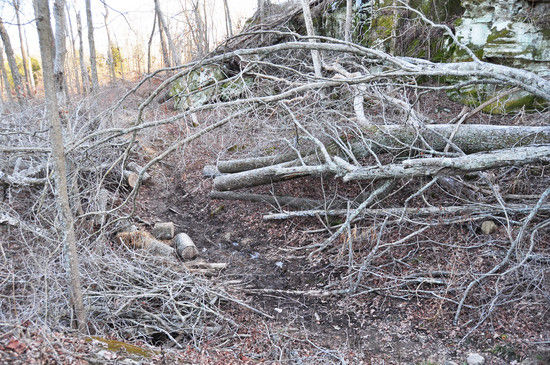 After leaving the bluffs for awhile, the trail eventually comes to another series of rocks. 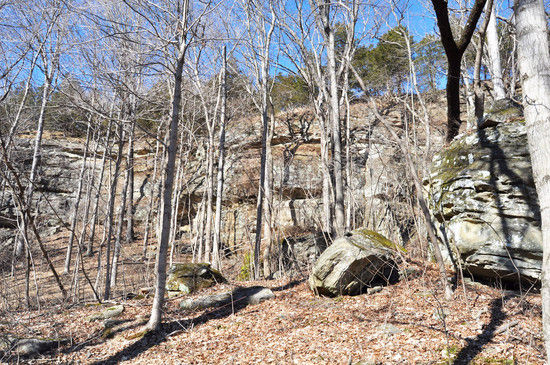 I stumbled across an opening in the bluff that provides passage along a surprisingly deep — and cold — crevice. 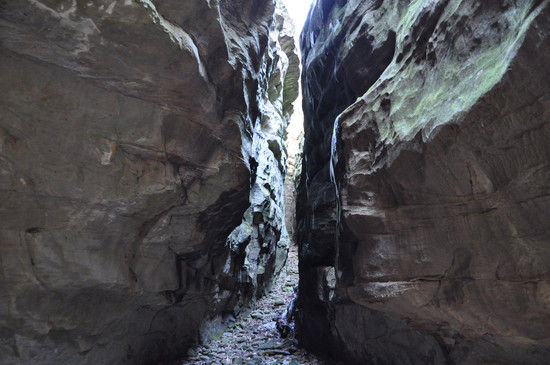 Located in permanent shadow, the crevice walls were coated in ice during my February visit. Even in the height of summer, I imagine this place is always cold, not to mention spooky. 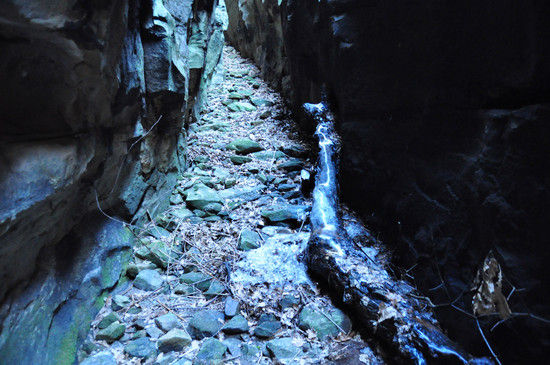 The crack makes a 90° turn and slowly climbs upward. It doesn’t quite reach the top of the bluff line, however, so I had to make a U-turn. 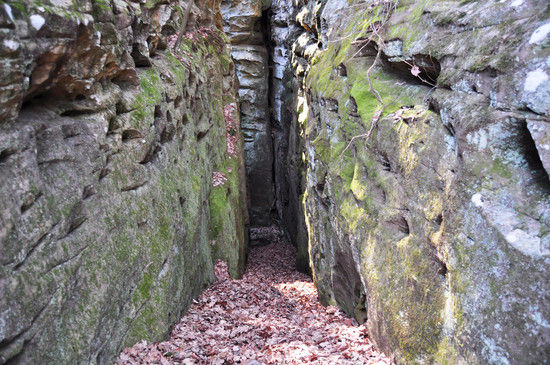 Back on the trail, I soon reached another stretch of damaged trees. Somebody had fun with one of the large trees that fell across the trail, carving a step into the log. 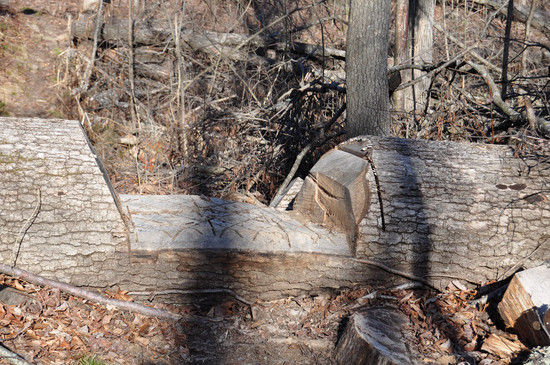 At a creek crossing, two fallen logs were pushed across the water to create a makeshift bridge. 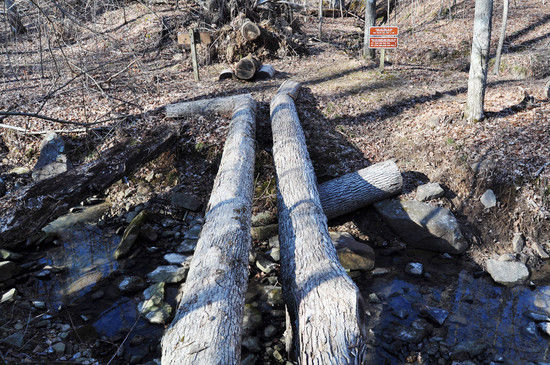 The Cove Hollow Trail intersects another trail, the Wolf Den Hollow Trail, at this bridge. As it was getting late in the day, I turned around here, but both trails continue south for a couple miles to reach a second trailhead on Boat Dock Road. Additional trails wrap around the southern end of the lake.

With the lake, rock shelters, bluffs, crevices, and other curious rock formations, the Cove Hollow and other Cedar Lake trails provide plenty to see whether you prefer a short or a long hike.

With 23 miles of flowing waterway, Nippersink Creek is the largest tributary to the Fox River.

Paddle through restored prairies and wetlands that offer plenty of sunshine and expansive vistas. Look down into the clear waters to catch glimpses of any one of 40+ species of fish that travel through; and watch and listen for birds of all kinds, especially Red-winged blackbirds who perch on the plant stalks near the banks, or swallows that skim over the water catching bugs. Great blue herons and white egrets are plentiful while kingfishers may be spied nearby. Grassland birds like bobolinks and dicksissels hide in the prairie but if you listen closely you may hear their bubbling and buzzing calls. Muskrats are common but Nippersink Creek is also home to beavers, as well as reports of river otters. 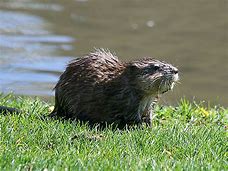 Nippersink Creek is a wilderness getaway that provides excellent wildlife watching AND… It is never the same ride twice, so be sure to return often and in different seasons.